Catholics gathered on the lawn of the U.S. Capitol on July 18 to protest the Trump Administration’s immigration policies. The event — #catholicdayofaction — drew nearly 250 Catholics. Police arrested some of the protesters for demonstrating illegally in a Senate building. Among them was Gayle Lwanga Crumbley, RGS.

Following a prayerful assembly and press conference, where she spoke, Sr. Gayle walked with other protesters to the Russell Senate Office Building to make her stand. She and Larry Couch, Director of the National Advocacy Center of the Sisters of the Good Shepherd (NAC), engaged in civil disobedience in the Senate building. Their aim was to draw attention to the plight of children being detained by the U.S Government.

Five protesters laid face-up on the floor in the senate building. They formed the shape of a cross with their bodies. While they lay on the floor, the rest of the protesters circled them and recited the Lord’s Prayer. Sister Gayle and Larry were arrested, along with 68 other Catholic demonstrators. Police arrested them on misdemeanor charges. The protesters gained freedom the same day after paying a $50 fine. 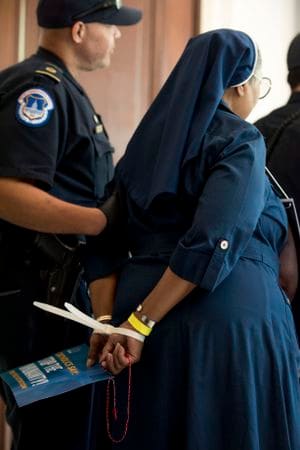 Catholics arrested for ideals of faith

Larry said, “Our bedrock American ideals marry well with our Catholic faith in providing refuge to those in need and welcoming people into our communities. With this action, I hope to call more Catholics to demand our government immediately end the detention of children.”

Leaders of 14 faith organizations, including NAC, signed a statement in support of the protest. Catholic bishops and orders of women religious sent statements supporting the gathering and civil disobedience action. The Province Leaders of the Congregation of Our Lady of Charity of the Good Shepherd abhor the needless deaths occurring at the border. They issued a statement in reaction to the Administration’s immigration policies. The statement is titled In Defense of the Human Dignity of All People at the Border, Especially Children. It reads, in part: “The people at our southern border are not our adversaries. They are fleeing a desperate situation in their home countries, a situation of extreme poverty frequently caused in part by our national policies.” https://bit.ly/2M8T6rZ

Courage to do the right thing

Marge Clark, Sister of Charity of the Blessed Virgin Mary and Advisory Board member for NAC, spoke to reporters. She said, “We hope that by being here and putting our bodies on the line, we can give members of Congress courage to do the right thing. It’s important to go beyond words, to put your body where your words are, where your beliefs are.”

The demonstration came less than a week after President Trump promised a crush of immigration raids in cities around the country. The Catholic demonstration was the second protest that followed the president’s remarks. Two days earlier 100 Jewish activists had locked arms and formed barriers around the Immigration and Customs Enforcement (ICE) building, disrupting the agency’s daily operations. They were arrested.