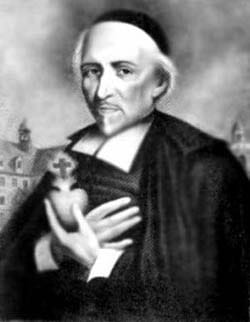 John Eudes (November 14, 1601 - August 19, 1680) was born at Ri, Normandy, France, on November 14, 1601, the son of a farmer. He went on to become one of the most remarkable priests for the role he played in the religious renewal of 17th century France. He is especially known as the father, the doctor and the promoter of the liturgical devotion to the Heart of Jesus and Mary. John Eudes also founded the Congregation of Jesus and Mary and the Sisters of Our Lady of the Refuge.

It was during his missionary travels throughout France that Fr. John Eudes became increasingly aware of the moral distress and exploitation of many girls and women. In 1641, in order to help and assist women who wanted to change their lives, he established a refuge in Caen which he entrusted to some women who wished to share with him this service of charity. It was the beginning of what would become the Order of Our Lady of Charity. To demonstrate the beauty of their vocation and to ensure that the Sisters remained faithful to their specific mission, he gave them a fourth vow: zeal for the salvation of souls.

In 1666 the Refuge sisters received Pope Alexander III's approval as an institute to reclaim and care for women. The first community of Caen had a difficult and turbulent beginning. A few years later, the help of the  Sisters of the Visitation and the official recognition of the civil and religious authorities ensured the stability of the house. In 1673 the community of Caen was able to build a new house in Rennes, followed by the construction of others. Each community was independent, while maintaining contacts with the others, particularly with that of Caen.

In 1789, when the French Revolution broke out, there were seven monasteries of Our Lady of Charity in France, faithful to the mission received from their founder: assisting women in difficulty. At that time, France went through a period of violence and anti-religious fights. One after the other, the houses closed, leaving the communities scattered throughout the country.

Over time almost all of the communities gradually reestablished themselves, though remaining in precarious conditions. Tours, which had been founded in 1714, was restored as a community in 1806. It is in Tours that Rose Virginie Pelletier entered the Order of Our Lady of Charity. She was given the name Mary of St. Euphrasia. Formed in the sources of the Sacred Scriptures and the John Eudes (Eudist) spiritual traditions, she spent the early years of her religious life serving in an active ministry taking care of young women.

The founder of Sisters of the Good Shepherd Mary Euphrasia longed that the whole world would benefit from the saving work that John Eudes initiated. She saw the need for a central government so that the Sisters could be sent to all parts of the world. Upon her death on April 24, 1868, there were 110 houses worldwide. Mary Euphrasia was canonized on May 2, 1940.