The new video series about Saint Mary Euphrasia has a back-story. In telling a story to her community of Sisters one day, Saint Mary Euphrasia said, “A long time ago, while traveling with two of our Sisters, we broke the journey and stayed with a Community, where we were cordially welcomed. In the course of conversation, I asked one of the Sisters when this house was founded. She gave me an evasive answer. Then I asked, ‘What is your foundress’s name?’ She answered quite naively that she didn’t know. I can’t tell you what a poor impression that gave us. I would be deeply grieved if any of you found yourself in such a situation; and how much more if a certain spirit of carelessness and indifference crept into the Institute. I hope it will never come to that.” (Conferences, chapter 65)

This plea from St. Mary Euphrasia is something that the Office of Mission Effectiveness takes to heart. First of all, our founding stories are fun! We have stories about what St. Mary Euphrasia was like when she was a child, how she developed into the person she became, the challenges she faced, and who her friends were.

Our founding stories inspire and ground us. For example, many Good Shepherds through the years have been inspired by the building of the tunnel connecting the Motherhouse to St. Nicholas Abbey. Knowing the story gives us strength to persevere in our own struggles.

Roots of the video series 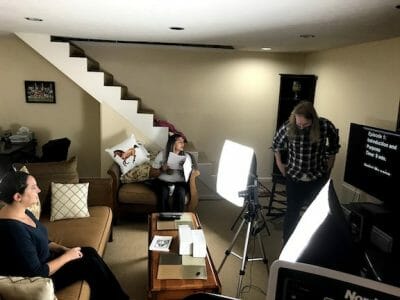 The video series is embedded in a training that Sr. Glynis McManamon developed in 1995 for the staff at Maryhurst in Louisville, Kentucky. The training was an all-day retreat called “Get Real Mary Euphrasia.” I remember taking the training after I had been a youth counselor at Maryhurst for just a few months. I was hooked!

The video series also embodies the talks that Sr. Anne Josephine Carr has been presenting for the Angers Pilgrimages since 2001.

Melinda Stricklen, previous Director of Mission Effectiveness, took Sr. Anne Josephine Carr’s stories and Sr. Glynis’ trainings and adapted them for use at Maryhurst and other places, like orientation for the Good Shepherd Volunteers. She and Barbara Beasley, RGS, worked tirelessly and consistently to keep the founding stories alive and relevant in order to connect Good Shepherds to St. Mary Euphrasia and one another. My goal is for this new video series to serve as one more step in connecting Good Shepherds to our founding stories.

One of the top priorities for Mission Effectiveness is to make the founding stories accessible and applicable to all partners in mission.

Last fall at a conference, I was talking to Sr. Monique Tarabeh, the Congregational Communications Coordinator. I shared with her my dream of making the life and mission of St. Mary Euphrasia accessible to all of our people. Sister Monique volunteered to film and edit the videos and to get them translated into French and Spanish as well as English so that any Unit in our Congregation could learn from them.

Sadly, COVID-19 made it impossible for Sr. Monique to come to the United States to work on the project with me.

Thankfully, we have many talented people in our Good Shepherd family and a wealth of resources. With the

backing of the Mid-North America Province Leadership Team, I went to Maryhurst for help, where it all started, and where commitment to Good Shepherd’s mission and core values continues today.

Patrick Boardman, Director of Marketing and Communications at Maryhurst agreed to volunteer his time and expertise to film and edit. I wrote the scripts, keeping them conversational and short enough to be used in a staff meeting. Courtney Lucas, another partner in mission at Maryhurst, agreed to  ask prompting questions.

We completed the filming in October at the home of another Maryhurst partner in mission, Marsha Esarey. Each video runs 10-15 minutes and includes questions for connection and reflection.

Importance of the video series

The videos reveal stories of what Saint Mary Euphrasia (young Rose Virginie) was like as a teenager, how she came to be named Mary Euphrasia, her leadership and expansion of the global mission, and her legacy. And perhaps most importantly, what does that all have to do with us today?

My hope is that the video series, which includes a downloadable reflection booklet, will be used in a variety of contexts. Ideally, the videos will be watched in a group setting so that participants can share their thoughts about the stories and reflection questions. They can be used for new employee orientation, Board formation, staff meetings, retreats, personal reflection, and/or small group reflections.

The videos vary in length between nine minutes and 19 minutes. You can find each of the videos in the six-part series on the Good Shepherd Mission Effectiveness YouTube channel.