Elise Ann Kramer found a pamphlet about contemplative nuns in a drawer in her home while growing up. That pamphlet would plant a seed in the young girl’s mind and eventually spur her to inquire about religious life.

As an adolescent, Elise made a few initial inquiries with different religious communities. She even visited some of the convents. But Elise wasn’t serious about pursuing religious life and didn’t see a fit for herself early on.

“I was more curious about asking questions and wanting to learn about the orders than I was serious about joining one. I knew I wouldn’t stay if I entered at the time because I didn’t feel called to any of those communities. It wasn’t until after I left high school that I thought seriously about my call to become a religious sister,” she said.

Elise completed high school at the Academy of Our Lady of Mercy Catholic high school in Louisville, Kentucky, (later named Mercy High School), where she studied academic and business courses. She chose not to attend college after graduating from high school because she didn’t like studying and taking tests.

She took a job as a stenographer with the Jefferson County Welfare Department in Louisville. In the early 1950s, being a stenographer was one of the few things young women could do without a college degree. One day a social worker told Elise about an agency called Maryhurst. She hadn’t heard of the agency and thought it sounded like an interesting place she might investigate. 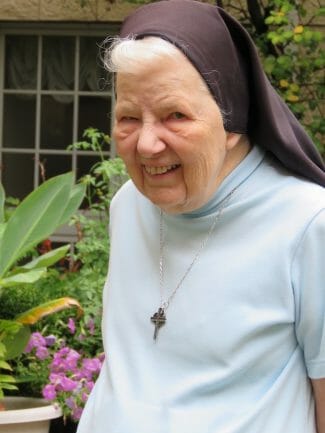 As fate would have it, the decision to visit Maryhurst came in a roundabout and unexpected way. A girl who was the sister of the bride getting married to her brother had been a resident at Maryhurst. She wanted to show off to the girls who were still in residence that she was going to be in a wedding, so she convinced the wedding party to drop in on the Maryhurst campus. It was 1952, and Elise was 22 years old.

“The entire wedding party went to Maryhurst. I was in the wedding party and I went too, along with everyone else. The girl who had been a resident at Maryhurst started talking about her experience of living there. I liked what she was saying about Maryhurst. It sounded like a ministry where maybe God was calling me to serve. So, I made plans to visit Maryhurst and to talk with someone about the agency,” Elise said.

“I told the provincial that I wasn’t sure if I wanted to enter soon and she blurted out to me, “You don’t want to wait until you have one foot in the grave before making your decision, do you?”

There on the spot, the provincial gave Elise three dates to choose from to join the order: September 8, 12 or 15.

Elise had decided early in her young life that marriage wasn’t for her, so with no further hesitation, she chose September 15 as her entry date because her sister expected her baby to be born by then and Elise wanted to be at home to welcome the new infant.

“But, as it turned out, the baby came late on September 17th, and I missed the birth after all,” Elise said.

“My family was close-knit. My mother wrote to me every day of the week when I first entered the convent. One day the Novice Director summoned me. When I went to see her, she suggested that my mother’s letters would be more suited as weekly, rather than daily, correspondence. She quizzed me about my family relationships.

Letting go of her independence

“Your family is close,” she said. “You do know that you might be missioned long distances away from your family, don’t you?”

It wasn’t long after that brief conversation with the Novice Director that Elise’s mother quit writing to her daily. It was to be the first of many situations in religious life when Elise had to let go of her will and accept the vow of obedience. 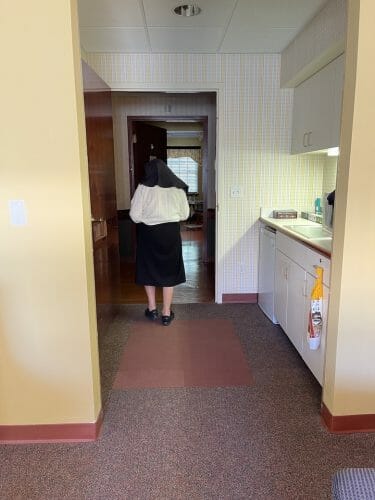 “I knew what I wanted by now, and that was to be a Sister of the Good Shepherd. It meant making sacrifices. I figured if the Good Lord wants me to be a religious, then I have to do things the way Sisters do them,” Elise said.

Elise had intended to be a contemplative nun with Good Shepherd, but she was told before entering the convent that the Superior had other ideas for her. The Superior said she would be an apostolic Sister.

Not knowing what was in store for her as an apostolic Sister, Elise awaited her destiny. She figured everything has its advantages and disadvantages, so she would accept come what may.

Elise was first missioned to Our Lady of the Highlands in Fort Thomas, near Cincinnati. In 1958, she went from there to Vista Maria in Detroit. While there, she obtained an undergraduate degree at Mary College in Detroit and stayed for a good while at Vista Maria. In 1974 she was missioned to work at Rosemont in Columbus as a supervisor of girls in the cottages. She then went to college for a Master’s Degree in social work.

“My mother said I was the last person she ever expected to get degrees because I never liked studying and never had any intentions of going to college,” Elise said.

Elise hadn’t held her Master’s Degree in Social Work for long until the new provincial made her the Executive Director of Rosemont, an administrative position she never wanted.

She was elected provincial of Cincinnati in 1989 and stayed there until 1995. She went to Cleveland in 1996 for a short time as temporary Executive Director of Marycrest, a residence for expectant mothers in addition to other youngsters, until they hired someone. Then it was back to Vista Maria in Detroit to fill in until they hired someone full-time there, as well. Then she returned once again to Cleveland.

In 1999, Sr. Elise was missioned again to Columbus, where she stayed until 2002. In 2002 she became local leader of Pelletier Hall. She stayed there beyond her six-year term. After leaving Pelletier Hall, she went to St Louis for 18 months, from 2012-2013, to get a break from the administration. Then she returned to Pelletier Hall as a resident. She came to Cincinnati to the Beechwood Community and main contact for St Margaret Hall in 2016. And Beechwood is where she is today.

Sister Elise was born and raised during her formative years in the city of Louisville, Kentucky, in a household of five girls and three boys. The family later moved to Pleasure Ridge Park, in Jefferson County, Kentucky, which her mother dubbed “Dismal Hollow.”

In reflecting on her decision to become a member of the Good Shepherd congregation, Sr. Elise said, “The best aspects of being a Sister are the spiritual advantages and ability to follow the Lord, and also being with and serving the girls. And even administration, which I never wanted, was OK.”