Sister Jean Marie Fernandez coordinated a silent retreat for Good Shepherd Sisters to coincide with The Year of Consecrated Life. The theme of the retreat was “A New Life in Christ as Consecrated Women.”

More than 50 Sisters participated in the silent retreat. They came from Immaculate Heart Convent, the Province Center, Maria Droste Contemplative Community and from across the provinces of Mid- North America, New York, Central South and English speaking Canada. It was a time of silence, prayer and beauty. The retreat was held in the chapel at the Province Center in St. Louis.

Wake up the world 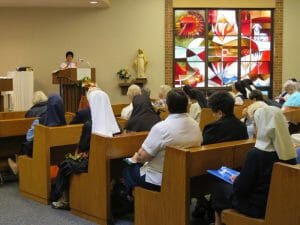 Sr. Jean Marie had experienced the spiritual teachings of Sr. Rekha Chennattu, Religious of the Assumption, at the Inter-Continental Assembly for Americas (ICA) in Ecuador last September and was moved by her spirituality and depth of theology.
When a number of Sisters expressed interest in having a retreat, Sr. Jean Marie thought immediately of Sr. Rekha and invited her to lead the retreat.

According to Sr. Jean Marie, the retreat with Sr. Rekha was an experience of waking up … a journey of awakening. 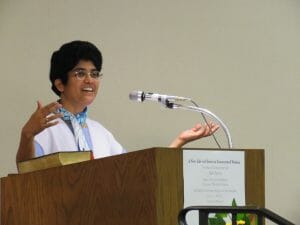 To be taught by God

“Sr. Rekha witnessed and exemplified a Bible passage she quoted during the retreat: ‘The greatest challenge is not to teach theology, but to be taught by God. (John 6:45). By the witness of her very being, Sr. Rekha exemplified that Bible verse in the 8-day retreat,” said Sr. Jean Marie.

Each of the eight days of retreat focused on a different aspect of newness such as a new way of relating to one another, a new way of animating as friends, a new way of witnessing with joy and zeal. Sr. Rekha said she had three reasons for emphasizing newness:

“First, I was following the invitation of Pope Francis. He invited consecrated women and men to “be witnesses of a different way of doing things, of acting, of living! He tells us that it is possible to live differently in this world through a new way of living as a consecrated person,” she said.

“Second, key personal experiences of God tell me that we become new persons at each moment of our life. We need to be open and free enough to see that ‘newness’ in me and in others. Indian mysticism would say that we are created anew at every moment (just like a river flowing, we can’t step in the same river twice). Our life is journey, and we human beings are in the process of becoming … becoming always somebody new through God’s grace and our ongoing personal conversions,” she said.

Finally, for me, a retreat is meant to bring about something new in our life as we are touched by God, healed by God, loved by God and saved by God. The retreat invites us to participate in the new life of the Risen Lord!” Sr. Rekha said. 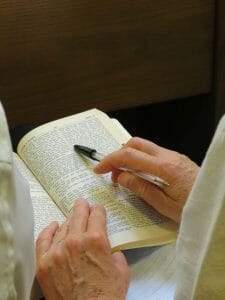 Sisters gained different experiences from the retreat. Sr. Joan Spiering said, “What was new to me was the way Rekha opened up the John 10 passage on the Good Shepherd. From years of praying Psalm 23 as a prayer of comfort in times of darkness, nourishment in the face of spiritual hunger, guidance in times of lostness, I had read John 10 along similar lines.

“I thanked God for the fact that Sisters of the Good Shepherd has a National Advocacy Center urging us in these directions. I feel motivated to review each candidate for office in light of Catholic Social teaching and to review my life in light of the values that Pope Francis has included in his new encyclical on the environment.”

Moved by Sr. Rekha’s presentation on a new way of animating as friends, Sr. Beth Garciano built a powerpoint presentation that conveys the meaning of FRIENDS through rich symbolism and metaphor: Free from attachments, Respect for life, Integrity of Creation, Equality between poor and rich, Nurturing Creation, Divine presence, Spirit of joy. 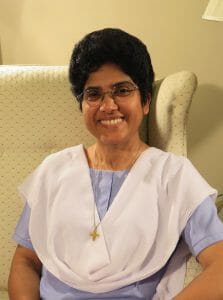 Rekha Chennattu was India’s first Catholic woman to become a fulltime seminary professor. Rekha holds advanced degrees in scripture studies from Pontifical Biblical Institute in Rome and Catholic University of America in Washington, DC. She is the author of Johannine Discipleship as a Covenant Relationship, which offers a first-class study of Old Testament covenant theology.

To learn more about what’s happening in the Province of Mid-North America, please read our monthly newsletter Items of Interest.