Running is the name of the game

Home / News & Stories / Running is the name of the game

Running is the name of the game in Baltimore each October, when runners take off in the Baltimore Running Festival. This year’s event, held on October 18, had some especially zealous participants. Sisters and staff from Good Shepherd Services Baltimore (GSS) weren’t about to get left behind, not when a good cause was at stake.

Nobody had to ask the Good Shepherds twice to get their motors running. They joined every type of runner in the race — from the competitive marathoners and relay teams to the relaxed 5K runners and kids who ran for fun.

The running festival draws large numbers each year because it has a lot to offer. There’s camaraderie among fellow runners. Volunteers and spectators cheer runners on along the course and provide them with directions so they get to the finish line, where a Celebration Village awaits, replete with food, bands, games and other assorted festivities. The best part is that charity groups can raise money for worthwhile causes. Good Shepherd runners raised $5,000 for GSS programs. 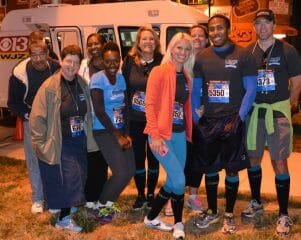 “We all had a great time running and showing our zeal for Good Shepherd Services,” said Sister Mary Carol McClenon. The Running Festival also included a health and fitness expo, musical entertainment and a pasta dinner at Baltimore’s Inner Harbor.

Good Shepherd Services Baltimore is a sponsored ministry of Sisters of the Good Shepherd Province of Mid-North America.