Ecumenical Advocacy Days (EAD) shapes a prophetic voice for justice. EAD brings together faith-based people from across the U.S. each year to affect change through the legislative process. More than 1,000 people came to EAD April 17-20 to deepen awareness about systems of exploitation and to help one another light fires within themselves to take action to change those systems.

Among the participants were priests, pastors and prison chaplains, deacons, youth ministers, Catholic Sisters and parishioners, seminarians and theology students, mothers of imprisoned youth, Peace Corps volunteers, churches and nonprofit organizations, economists, consultants and many individuals who are on the front line of the peace and justice movement.

“The ultimate goal of Ecumenical Advocacy Days is to raise the moral voice of the progressive Christian community,” said Douglas Grace, director of EAD.

Dr. Bill Medford, Director for Civil and Human Rights, United Methodist Church General Board of Church and Society, said, “Churches must develop a prophetic voice for justice. We have been silent too long,”

Stories of injustice underpinned the conference, whose theme was Breaking the Chains: Mass Incarceration and Systems of Exploitation. 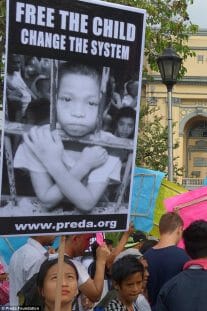 Irish missionary priest Father Shay Cullen spoke about an area in the Philippines where street children are rounded up and put into jail cells that are not much larger than dog cages. Incarcerated pedophiles are kept in cells so close to the children that they can easily reach into the cages where the children are locked. Father Shay formed People Recovery Empowerment and Development Assistance (PREDA) Foundation to help incarcerated children and adolescents who are being trafficked for sex.

“We must do everything in our power to challenge structures that victimize the innocents,” Fr. Shay said.

Another priest, Father Valdir Joao Silveira, National Coordinator of the Prison Ministry Pastoral in Brazil, showed shocking photographs of Brazil’s prisons. It is common practice to confine between 40-60 men to prison cells that were built for six people. Women prisoners who are pregnant in Brazil are shackled during childbirth and their newborns removed from them abruptly after birth.

Stories of exploitation on the home front abounded as well, particularly mass incarceration of minor drug offenders and controversial family detention camps for immigrants. Stories were rife with familiar refrains of neglect, abuse and corruption.

“There is a lot of evangelizing we can do to change systems. We discover our freedom through action,” he said.

Some participants shared their feelings of being overwhelmed by the many examples of domestic and global systemic injustice. Others said they felt energized by the stories, as the awareness deepened their conviction to affect permanent and positive change.

“The more we know, the more responsible we are for taking action,” said David Schilling, Senior Program Director – Human Rights and Resources for the Interfaith Center on Corporate Responsibility.

Plenary panelist Emira Woods said, “We must dare to invent the future. We’ve got to be courageous and lead the battle to remove the chains of injustice.”

Douglas Grace believes that most people come to Ecumenical Advocacy Days to deepen their faith and commitment to causes while developing stronger advocacy skills.

“People who come to the gathering want to use their voice for change. The church leaders who come want to motivate their churches to be the voice of justice,” he said.

The collective voices from EAD gathered  on Capitol Hill the final day of the conference. Participants met with their U.S. Representative and Senators or, more likely, with their respective legislative staff. During the meetings, the conference participants pressed for an end to mandatory minimum sentencing, an end to bed quotas for immigrants, and an end to immigrant family detention.

“We are not looking only for a change in legislation, but a change of heart,” Larry said.

This collective presence is what counts, according to Larry. He said, “We are not just individuals at EAD. We represent a collection of organizations that believe strongly enough in the issues to be a powerful voice with legislators.”

Many of the persons attending the Ecumenical Advocacy Gathering had never participated  in a lobby visit. The break out sessions provided an opportunity to review the legislative asks, decide who will be the lead speaker for each issue, and to role  play in preparation for the meetings with legislators. Larry facilitated the sessions for Maryland and West Virginia delegates.

When a participant in one of the sessions said he was the sole advocate representing West Virginia and felt a little intimidated meeting with legislators alone, Larry comforted him by saying, “We always bring the Holy Spirit with us when we go into legislative rooms. We don’t go alone; we go with God. As people of faith we never stand alone.”

EAD Mass celebrant Father Michael Bryant said, “We are bridge builders and menders of broken fences; that’s who we are. We came here together as faith-filled people. Having an ecumenical gathering focused on these important justice issues is a blessing. It’s going to take more than one faith to tackle all of the problems facing our nation.”

National Advocacy Center is a joint ministry of Sisters of the Good Shepherd Province of Mid-North America and the New York Province.