Nuclear waste is a problem in St. Louis and the Good Shepherd National Advocacy Center is trying to figure out how it can engage in the issue for impact.

Province Director of Operations Monte Abbott and I accompanied Senator Maria Chappelle-Nadal on a tour of nuclear waste sites in St. Louis on October 23, 2016.

Monte also serves on the Advisory Board for the National Advocacy Center (NAC) and is helping NAC explore environmental concerns to determine where it can engage for impact. I documented the tour.

Sen. Chappelle-Nadal represents District 14 in the Missouri Senate. She said, “I ran for state congress literally to save the lives of people who live near nuclear waste sites in St. Louis. No political allies were addressing this issue, so I stepped forward to do it.”

The Senator also conducts Town Hall meetings to address citizen concerns. Religious and Laity will  attend some of the meetings in November.

Nuclear waste from the atomic age

The U.S. Department of War hired Mallinckrodt in 1942 to produce fissile material from the original Belgian Congo Uranium (U235) for The Manhattan Project. Mallinckrodt used the materials to produce atomic bombs that were dropped over Hiroshima and Nagasaki, Japan.

From 1942 to 1957 Mallinckrodt purified tens of thousands of uranium products at locations in and around the city of St. Louis. By the mid 1940’s Mallinckrodt had run out of space downtown and began shipping its uranium enrichment waste to a 21.7-acre tract of land at the St. Louis airport.

They secretly dumped the nuclear waste on Coldwater Creek and in various St. Louis suburbs, with approval of the federal government. Coldwater Creek flows through north St. Louis County before draining into the Missouri River near the confluence of the Mississippi River.

The creek interconnects underground caves, springs and groundwater tables. This system — coupled with wind, rain, flooding and groundwater seepage — made it possible for radioactive material to travel.

Population boomed in rural St. Louis County from the 1950’s to 1970’s. With population growth came a flurry of construction activity for new subdivisions and businesses.

Construction grading disturbed radioactive materials, effectively redistributing the contamination throughout all of North St. Louis. Some of the radioactive materials that had previously been buried were now exposed to open air, or used as fill for newly created subdivision lawns, parks and golf courses.

Waste was later moved from the airport to nearby neighborhoods. During the move, improper handling and transportation of the waste further contaminated areas along haul routes.

The most well-known nuclear waste site in St. Louis is just 11 miles from the Province Center. The West Lake Landfill Superfund Site is an illegal dumping ground that contains one of the single largest concentrations in the U.S. of hazardous radioactive Thorium-230 residues.

The landfill is located in the Missouri River floodplain, just upstream from the confluence with the Mississippi River, as well as St. Louis metro region drinking water intakes. It is immediately adjacent to an underground landfill fire.

“There are three federally documented waste sites in St. Louis. But oral reports from haulers suggest that waste was dumped at many unregulated sites in North St. Louis County,” Monte said. 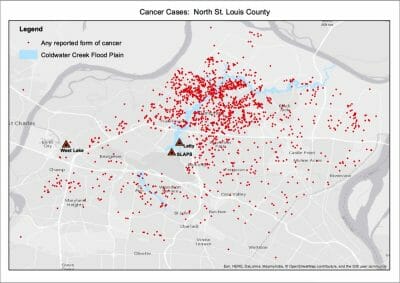 North St. Louis County was an agricultural region during the atomic age. Radioactive  materials were stored in open piles and mixed with residential dirt. The radiation leached into local farms and backyard gardens, as well as local dairy supplies.

Neighborhoods in North St. Louis County have been chronically exposed to ionizing radiation for decades through inhalation and ingestion. Radioactive dust is still being carried by wind and water today.

Neighborhoods in North St. Louis County are experiencing identical cancers and diseases that the Centers for Disease Control and Prevention, Environmental Protection Agency and Agency for Toxic Substances and Disease Registry have linked to ionizing radiation exposure.

Dr. Khan said identifying a true cancer cluster is very difficult, but that what is happening in North County needs long-term study.

Dr. Khan said identifying a true cancer cluster is very difficult, but that what is happening in North County needs long-term study. Currently, engineers are testing soil along the 15 mile Coldwater Creek. The federal government is paying for some nuclear waste cleanup, but it will take years to complete.

“People are just starting to unravel this issue. The data is technical and hasn’t been translated for average people. The entire situation is huge and complex,” Monte said.

There are many groups of stakeholders who are investigating different parts of the puzzle, each of which is focused on their own needs and concerns. No one has the 30,000-foot view and no one is serving as the bridge between the groups, according to Monte.

The groups represent a diverse citizenry. Some of the groups represent residents who are suffering from atypical diseases and have lost family members from rare forms of cancer. Other groups represent federal agencies, hauling companies and corporate boards ofdirectors, politicians, doctors and environmental activists to name just a few of them.

Monte will continue to engage with Sen. Chappelle-Nadal and citizen action groups who are monitoring the situation so he can report back to NAC at quarterly meetings with information that will help the Advisory Board discern possible ways to help.

So many questions about nuclear waste

As for me, I wonder about things I never gave thought to before going on Sen. Chappelle-Nadal’s nuclear waste tour. I grew up in St. Ann, a North County suburb, and played in Coldwater Creek as a child. My mother lives less than five miles from the West Lake Landfill.

What was the extent of contamination in Coldwater Creek where I played as a child? How has living near one of the most dangerous nuclear waste sites in the United States affected my mom’s health? How much effort is really being made to clean up the messes in North St. Louis County?

I don’t know where my questions and this newfound awareness will ultimately lead me, but I do know my next step. I will attend Sen. Chappelle-Nadal’s town hall meeting in Normandy on November 5 to hear what The People are saying about this problem and learn how they are organizing to find solutions and create change.

Links to help you understand the issue