NAC has expanded its online presence

Director Larry Couch said, “As Pope Francis has said, ‘We are not in an era of change but a change of era.’ As such, we need to communicate with young people and those in all age groups in newer and more creative ways through social media.” NAC heads into its 15th year with the increased online presence and a new slogan — Rise Up and Act for Justice.

Shades of blue are used in the new NAC logo in honor of the Virgin Mary and the Sisters of the Good Shepherd.  The two figures are shown with arms raised signifying empowerment, community and the lifting up of marginalized people through political advocacy.

The National Advocacy Center is the lobbying arm of the Sisters of the Good Shepherd, their ministries and agencies serving in the United States and more than 70 countries. The purpose of NAC is to serve as the voice for those on the margin of society, in particular women, girls and children.

NAC has a new cyber home

The new website provides a dynamic home for NAC, offering resources, advocacy tools and action alerts to Congress. The Facebook page and Twitter  feed allow NAC to engage quickly with friends and activists, as well as a wider audience. The updated look and added media platforms give NAC a fresh face to engage with its many partnering organizations in Washington, D.C., and to expand its reach to college campuses and parishes.


If we are going to reach young people, we need to be deeply involved in social media.

NAC is a lead organizer for the annual Ecumenical Advocacy Days, which brings nearly a thousand people from across the U.S. every spring to our nation’s capitol. NAC also offers speaking and outreach opportunities and advocacy workshops.

In November Larry helped provide advocacy training at a gathering of 1,400 high school and college students from Jesuit schools across the United States.

“I was reminded again that if we are going to reach young people, we need to be deeply involved in social media,” Larry said,

“These young people and millions across the country and overseas can only be reached if we use contemporary forms of communication,” he said.

Larry also said that the large number of issues NAC addresses requires the agency to have readily available the most effective and quickest forms of communication.

The mission of the National Advocacy Center. It covers issues ranging from poverty, human trafficking and immigration to domestic abuse, criminal justice and racism.

“We seek to inform people of specific issues in a timely manner and provide them with an effective means for taking immediate action. In a matter of minutes we can advise people of a particular issue. With a simple click we can lead them to a pre-formatted letter that is ready to be sent to their legislators,” Larry said.

You can help the Good Shepherd National Advocacy Center expand its reach and increase its power by telling others about NAC’s online presence. 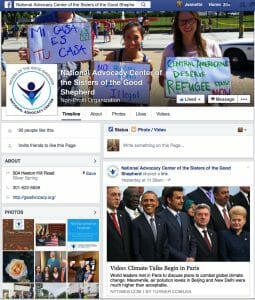 “It’s through the exponential impact of the internet that we can serve those most in need of help,” Larry said.

You can download a printable version of this story from the December issue of Items of Interest, the newsletter for Sisters of the Good Shepherd Province of Mid-North America.