Maisha: A New Life Outside the Mines

Home / News & Stories / Maisha: A New Life Outside the Mines

Maisha: A New Life Outside the Mines is a new short documentary that shows the fascinating work of three Good Shepherd Sisters. The Sisters used community-based participatory decision making models in the Democratic Republic of the Congo to create a sense of right, dignity and voice. Their efforts resulted in education, economic opportunity and food sovereignty for the region.

In 2010 the three Good Shepherd Sisters began a journey that changed forever the lives of thousands of miners working inside copper and cobalt mines in the mineral-rich area of Kolwezi, Democratic Republic of the Congo. Miners included men, women and children. The mined materials in Kolwezi are used to make vital components for computers and mobile phones. Very little of the multi-billion dollar mining trade reaches the people of the region, resulting in widespread poverty, chronic hunger and disease. 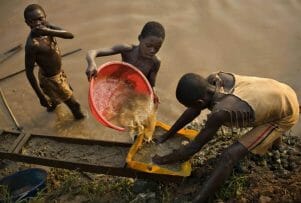 The film screens at the United Nations Headquarters in New York City on February 4. The screening is a side event that is being held within the context of the 54th Session of the Commission for Social Development entitled “Rethinking and Strengthening Social Development in the Contemporary World.”

Sister Clare Nolan, Training Facilitator for the Good Shepherd Congregation, will moderate the screening and post film discussion. The event is being hosted by the Permanent Mission of Ireland to the United Nations, the Permanent Mission of the Democratic Republic of the Congo to the United Nations, The Congregation of Our Lady of Charity of the Good Shepherd, and the NGO Mining Working Group.

Good Shepherd International Foundation funded the production of Maisha. The U.S. Embassy to the Holy See sponsored the film. You can watch the documentary at www.maishafilm.com. Sr. Clare wrote an article for Global Sisters Report, titled A parable for today – Introducing Maisha: A New Life Outside the Mines. Journalist Bernhard Warner produced the documentary.