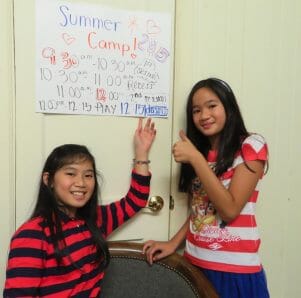 After videotaping interviews and photographing staff, clients and children, if I were to sum up in one word the essence of GSS Atlanta that word, hands-down, would be gratitude. Children frequently express their gratitude for what they receive from Sr. Christine, her staff and volunteers.

Spending a week at our province ministry in Atlanta is like attending one big love fest. Truly, the outpouring of abundant goodwill in Atlanta is enough to make a person want to return again and again to revel in the wonderment of lives being transformed and enriched. 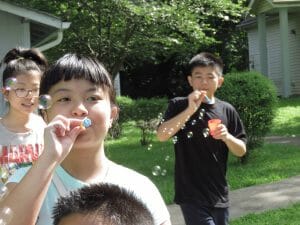 It’s no wonder there is so much love at Good Shepherd Services Atlanta. The ministry there has been about meeting the needs of children and their families since the very day Sr. Christine discovered the Vietnamese community in Atlanta. But her devotion to children starts long before then.

Sr. Christine Truong My Hanh was born in Vietnam. She left her homeland when the convents were overtaken by the new government of war-torn Vietnam and missionaries and Sisters were expelled. Sr. Christine was airlifted out of Saigon on a commercial cargo plane just 10 days before the capture of Saigon, the capital of South Vietnam, by the Communist regime from North Vietnam (Viet Cong) on April 30, 1975. This year marked the 40th anniversary of the fall of Saigon.

The flight took off with Sr. Christine and eight other women religious huddled on the floor of the airplane with 167 polio-stricken children. Sr. Christine was 23 years old. This harrowing experience cemented Sr. Christine’s resolve as a Sister of the Good Shepherd and set her on an impassioned lifelong mission for helping children in need.

After a long 18-year circuitous route from Vietnam to Singapore to the USA to Macao to Hong Kong to England, Sr. Christine came to Atlanta with Sr. Pauline Bilbrough in September 1991.

Once she was settled into Atlanta, it wasn’t long before Sr. Christine discovered the burgeoning Vietnamese community there and identified the people’s needs. With the support of the Good Shepherd Sisters, she began transporting immigrant and refugee families back and forth to Mass and finding volunteers to instruct children in the Catholic faith.

She conducted choir practice with adults and visited young couples to counsel them on marriage. She helped families find food and clothing, aided them in obtaining drivers licenses, Medicaid and citizenship papers. In short, she reached out to meet the health and human service needs of the Vietnamese community.

That all began in one tiny low-income rental apartment in 1993. Today Sr. Christine and seven full- and part-time staff work out of two converted bungalows with garages turned into classrooms. They still provide the same services they incubated in 1993 and have expanded programs to include legal and counseling services for  domestic violence, in addition to a comprehensive array of social programs for youth and the elderly.

Atlanta’s Vietnamese community knows Sr. Christine either personally or by stellar reputation. In reality, she has built a village. And like any village, there are children with needs, which she continually meets.

“Sr. Christine is an inspiration to her staff and to the Vietnamese people in Atlanta because of the work she does to help the community. She really cares,” said Xuan Nguyen, coordinator for the GSS summer camp program.

While Good Shepherd Services Atlanta mostly serves children and families from the Vietnamese community, its services are available to all people regardless of religion, gender, ethnicity and social background. The agency is a sponsored ministry of Sisters of the Good Shepherd Province of Mid-North America.