Healing presence in the lives of women

Home / News & Stories / Healing presence in the lives of women

Healing presence in the lives of women. That is how women at Good Shepherd Gracenter describe the recovery residence that offers them a supportive and gently challenging program to strengthen their early sobriety.

Gracenter helps women without resources break free from drug and alcohol addiction. The healing presence at Gracenter and power of God’s grace helps give women the courage and skills they need to choose a lifestyle of recovery, health and wellness, independence and employment.

I was a broken soul. I knew that if I didn’t seek help I would die.

A graduate of Gracenter, Deborah Jackson, came from a loving, affluent home in Oroville, California. Her addiction to crystal methamphetamine “just happened one day,” and she said, “it spiraled out of control fast.”

Jackson said she “pretty much gave my daughter to my mother,” stole money to keep her habit going and went to prison on felony charges. “I was a broken soul,” she said. “I knew that if I didn’t seek help I would die.”

Jackson’s story confirms what is known about addiction: People from any kind of background can become drug- or alcohol-addicted. “Once it gets into your mind and body, you’ve found your answer to whatever pain you’ve got,” said Jackson. “It’s very had to give that up.”

Jackson’s “treatment” came in the form of a long prison term. She’s never relapsed since leaving prison, but she did continue to struggle. “Drugs are not the only problem. Your thinking behavior, your actions, is the problem,” she said. One day, a woman that she had never seen before or since and whose memory brings Jackson to tears, said: “You can be anything you want to be,” and she believed her. 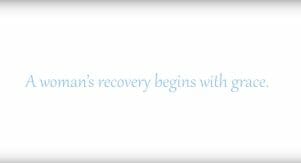 The healing presence of Gracenter

Sister Marguerite Bartling, Executive Director of Good Shepherd Gracenter, said a typical woman’s story at Gracenter would go something like this: “After not working for 10 years, she is successfully employed. This brings her gratitude and joy on a daily basis because she is now a productive member of society. Instead of just existing, she is living her life. People can count on her. She enjoys being there for others, volunteering her time and giving back to others. She has regained a loving relationship with her parents.

Gracenter has given me a new beginning. Now I can say that I am loved, beautiful, valued and being the best woman I can be.

The healing presence of Gracenter shows women that they are worth believing in. A Gracenter resident has a safe environment where she can live, the opportunity to become healthy and get back on her feet financially. She learns to be more mature and to respect herself.

Through all of this, she regains her family’s trust. When she leaves Good Shepherd Gracenter she has people in her life who believe in her. But most of all, she learns to have faith in herself, others and God again.

Gracenter is guided by the values of the Sisters of the Good Shepherd: compassion, reconciliation, zeal and mercy – and the belief in the dignity and worth of every person as a child of God. Seven Good Shepherd sisters in the adjacent convent are prayerfully involved on a daily basis in each woman’s recovery.

The program, funded by donations, grants and the volunteer efforts of the Gracenter Women’s Guild and others, is open to any woman who demonstrates a commitment to clean and sober living and a strong will to reclaim their lives. Gracenter’s program integrates the 12-step (Alcoholics Anonymous) long-term recovery model for drug and alcohol addiction.

Residents have private rooms but share meals, prayers, chores and struggles. Sister Marguerite and a case manager help each woman articulate goals and create individual action plans. They also provide access to education, paid internships, employment networking and links to primary physical and mental health care clinics. Each woman makes a six-month minimum commitment to the program and pays a small monthly fee. They may stay up to two years to complete their goals. Jackson’s three-year stay was exceptional, but so was her progress, said Sister Marguerite.

“Even though I didn’t know how to pray when I got here, I learned to pray with the Sisters. And at night I thank God for waking me up,” Jackson said.

For more information about the healing presence of Gracenter visit www.gsgracenter.org or contact Sister Marguerite Bartling at 415-337-1938.