Sister Mary Joy Benson participated in a Quaker-led action to end Mountaintop Removal (MTR) and came away from the experience enlightened and inspired. After reading Sr. Sharon O’Grady’s book review of Father Thomas Berry’s Selected Writings on The Earth Community in the February issue of the Province newsletter Items of Interest, Sr. Mary Joy felt moved to share with readers the impact the eco-action had on her.

It was exhilarating and heart-warming to be a part of such a loving, non-violent and joyful action!

“Before now I had never realized how much social justice work the Society of Friends has done, and for many centuries!” Sr. Mary Joy said.

“The Quaker group called EQUAT (pronounced as though it ends in “e”) means Earth Quaker Action Team. It is currently focused on getting PNC Bank to stop funding Mountaintop Removal (MTR) in Appalachia. PNC is the primary funder of MTR, a devastating practice that harms people and ecosystems by blowing up mountains with dynamite to extract the coal buried within,” she said.

“PNC calls itself the “green bank.” EQUAT has confronted the bank over its hypocrisy and has worked for five years to persuade PNC to stop funding mountaintop removal. The group doesn’t plan to give up until PNC stops destroying the mountains.

“I joined the Quakers for an EQUAT eco-action in February. We protested outside PNC Bank in Philadelphia’s city center and sang parodies of folk songs to draw attention to MTR and the hypocrisy of PNC. EQUAT is marvelously organized, zealous and persistent. People of all ages joined in the action, from age 8 to 86.

“We tossed flower petals on sidewalks and in the bank lobby,. We wrote messages in chalk on the sidewalks for all to see. EQUAT members gave sidewalk testimonials. We taped posters on bank windows that said STOP Mountaintop Removal, PNC! Quakers from across the U.S. have removed their money from PNC banks.

It was exhilarating and heart-warming to be a part of such a loving, non-violent and joyful action!”

Earth Quaker Action Team (EQUAT) is a grassroots, nonviolent social action group. It is inclusive of people of all faiths or no faith who join with millions of people around the world advocating for the Earth.

Over a span of four centuries Quakers have organized nonviolent direct action campaigns for specific goals. Examples include religious toleration in Puritan Massachusetts in the mid-17th century; stopping the British slave trade in the 1780s; gaining woman suffrage in the early 20th century; organizing freedom rides against racism in 1947; and ending atmospheric nuclear testing in the 1950s. 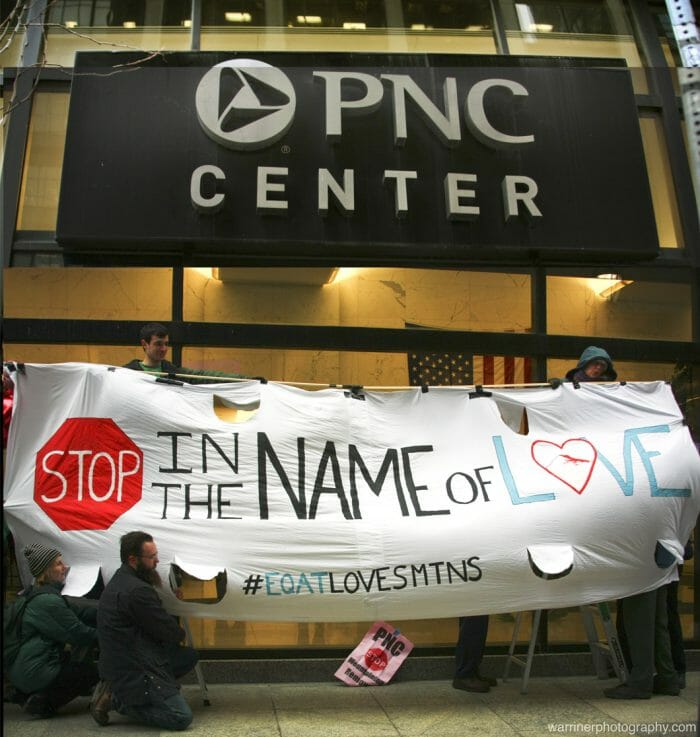 Today EQUAT is tackling the daunting problem of climate change by directly challenging those who profit from the destruction of nature and endanger human health and well being. Their current campaign is BLAM! — Bank Like Appalachia Matters! — a strategic effort to get PNC Bank out of the business of financing mountaintop removal.

EQUAT uses nonviolent direct action to shine the light on PNC Bank’s lead role as one of the primary financiers of the surface mining practice that has destroyed more than 500 mountains and 2,000 miles of river and streams in Appalachia. The campaign goal is to take the profit out of financing climate change.

For more information about EQUAT visit the website www.eqat.org.