After meeting with her doctor about growing concerns over the symptoms she was having, Sister Mary Carolyn learned that she had the progressive neurodegenerative disease that affects nerve cells in the brain and spinal cord — Amyotrophic lateral sclerosis (ALS).

Lou Gehrig, the great New York Yankees baseball player, brought national and international attention to the disease when he was diagnosed with it in 1939. Ending the career of one of the most beloved baseball players of all time, the disease is still most closely associated with his name, although the disease was first diagnosed in 1869 by French neurologist Jean-Martin Charcot. 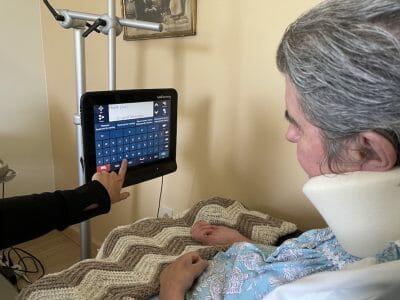 ALS affects the brain’s ability to initiate and control muscle movement. It causes paralysis as the disease progresses into its later stages. Sister Mary Carolyn is in the late stages of the disease, which has made verbal communication impossible for her. Because she can’t speak, a state-of-the-art device helps her communicate. The Tobii DynaVox eye gaze machine has given Sr. Mary Carolyn the power to get her thoughts out so people understand what she needs and is thinking and feeling.

This is crucial for communicating with nursing staff at Mason Pointe Care Center about her levels of comfort and physical needs. And the device enriches her life by making it possible for her to communicate with friends and members of her biological and Good Shepherd families.

DynaVox uses eye-tracking technology that allows computers to know exactly where the user is looking. Sr. Mary Carolyn can spell out words by looking at the device. She has enough eye muscle control to hold her gaze long enough to form sentences. The machine includes a speech-generating device that converts what she has written into spoken communication. Using the machine takes concentrated effort and is tiresome. It also can be frustrating when the artificial intelligence that is programmed into the machine assumes it knows what Sr. Mary Carolyn wants to say and completes sentences on her behalf, not always correctly. 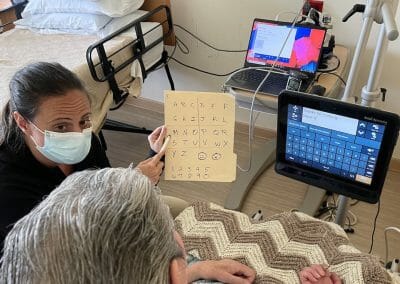 When the machine doesn’t get things quite right, Sr. Mary Carolyn defaults to a manual alphabet card to assist in helping her communicate her thoughts. If this method fails, then the speech therapist at Mason Pointe pitches in to complete spelling or sentence structures manually.

“I’m surprised she doesn’t get more frustrated. She’s got incredible patience,” said speech therapist Leah Meyer, who meets with Sr. Mary Carolyn each day to assist her with emails and her hearing aids. In anticipation of the sessions with Leah, Mary Carolyn prepares punch notes on the DynaVox.

The Sisters learned about the eye gaze machine through the province’s Health and Wellness Coordinator Vicky Barshis. One of Vicky’s job roles is to find resources for Sisters when health issues arise. Vicky connected with the ALS Association in St. Louis in 2016 when she was assisting Sr. Mary Therese Mott after she had been diagnosed with ALS. When Sr. Mary Carolyn’s symptoms from the disease worsened, Vicky knew to contact the ALS Association.

“I called them in January and asked to have someone come to Mason Pointe to meet with me and Sr. Mary Carolyn to identify what equipment might be available to help meet her needs. We also spoke about the need to hire a speech therapist who could assist her,” Vicky said.

ALS Association St. Louis Regional Chapter provided the DynaVox machine at no cost. It will be returned when Sr. Mary Carolyn no longer needs it so that someone else may benefit from it.

Gazing into the machine, Sr. Mary Carolyn typed out a quote for this story. She wrote, Thank you, Vicky. I am so very grateful to the ALS Association for the loan of the Tobii DynaVox. It is my window to the world. I can communicate with folks here at Mason Pointe and email my family and friends.”

Life changed quickly for Sr. Mary Carolyn with the rapid progression of the disease, but the things that really matter are still the same. She sits in the sunshine, and she enjoys listening to her favorite hymns. She Zooms with her family every other week. Friends drop in to visit. And Sister Madeleine is there without fail to keep her informed of province news and nurture the relationship, as friends are apt to do.

Sister Mary Carolyn is happy to engage in life. The bravery and words from Lou Gehrig’s famous 1939 farewell speech to baseball could be her own words:

“I close in saying that I may have had a tough break, but I have an awful lot to live for.”

Sisters of the Good Shepherd and Mission Partners from throughout the Province of Mid-North America participated in the annual ALS Walk on June 16, 2021. The Good Shepherd Team, organized by Vicky Barshis, Health and Wellness Coordinator, was the third-highest fundraising team in the ALS Association St. Louis Chapter. We raised more than $10,000 to support efforts to end ALS (Amyotrophic lateral sclerosis), more commonly referred to as Lou Gehrig’s disease. This year, due to COVID, the ALS Walk was a virtual affair. People walked on their own, rather than collectively as a large community event. Some people donated without walking at all, and that was OK too.

Sisters of the Good Shepherd have two lifestyles: apostolic and contemplative. Sr. Mary Carolyn is an apostolic Sister.