A woman’s recovery begins with Grace

A woman’s recovery begins with Grace. Good Shepherd Gracenter helps women break free from drug and alcohol addiction by providing long-term transitional housing with an individualized 12-Step Recovery plan. Many women graduate from Gracenter and lead healthy and meaningful lives. Regina “Gina” Duncan, a graduate of Gracenter, was recently hired as the ministry’s Resident Assistant. This is her story of recovery, relapse and renewal.

Gina, what would you say was the defining moment in your life when you realized you needed to seek help to recover from your addiction?

The defining moment when I realized that I needed help for my addiction was the night that I had a premonition of my son who had joined a gang being killed. I was so intoxicated I believed he was dead and promised my husband if he found him alive I would go to rehab.

How long had you struggled with your addiction before seeking intervention?

I began using drugs in September 2006 and used them nearly everyday until August 2009 when I entered Gracenter.

Gracenter believes a woman’s recovery begins with grace. How did you learn about Gracenter and know to seek help there?

I learned about Gracenter through the Treatment Access Program in San Francisco, which is a service of the San Francisco Department of Public Health. I was in detox at Joe Healy in order to safely go through alcohol withdrawal.

When did you come to Gracenter for recovery?

I entered Gracenter on August 7, 2009.  At the time Gracenter was an intensive program, not a transitional program like it is now. The age limit at the time was 35 and I was 36. An exception was made, and I was very grateful to be able to recover in such a beautiful environment.

When did you graduate from the recovery program at Gracenter?

I left the program around November 2009 after completing three months of intensive treatment.

What were some of the most significant highlights of the program for you? What stands out most for you?

The program was very spiritual.  I liked being around the nuns and having access to a prayer room where I could pray and read my Bible every morning.  I also liked having a counselor who was able to help me with issues that I never discussed with anyone before. We did some cool art therapy classes where I was able to find healing.

Were there any scary moments when you felt that you wouldn’t be able to overcome the addiction? If so, how did you deal with those fears? If not, how did you account for your level of serenity and trust?

Addiction is a very scary illness, since you never know when you could fall into using again. I dealt with my fears by never giving up. I learned to have faith in God and trust Him in the process, along with using practical steps to remain sober. For example, I used prayer, a twelve step program, a sponsor, a therapist and an accountability partner.

What sets Good Shepherd Gracenter apart and makes it a special place?

God is in that place. The Gracenter lives up to its name and vision of being a place where “a woman’s recovery begins with grace.”  It is a very healthy and well run place.  The case manager Sandra has a heart of gold and genuinely cares for the women. It is easier to ask for help when someone is truly invested in your well being.

What parts of the program did you find most useful and beneficial to your own personal needs?

Gracenter is a beautiful place, it is very pleasing to the eyes and there is a warm and peaceful feeling there.  It is rare to have a place to heal where you have your own room. That was important since I had suffered a lot of trauma.

How did you feel about the experience of living in a community of women at Gracenter?

There were ups and downs living with other women, but the benefits far outweigh the challenges. This was the first time I had openly shared with others about my very personal struggles, and it made me feel less alone and less crazy.

How did you get the job on staff at Gracenter? Can you explain the circumstances that led to you getting hired?

Sandra, the case manager, was always very approachable and her story always inspired me. I kept in touch with her after I graduated. My stepdaughter Linda was writing a college paper and I referred her to Sandra for an interview. Linda worked at Gracenter and when she moved to Atlanta about six months ago she asked me if I was interested in having her job. I gave Sandra a call. I believe that in all my failures and weakness I have now found my life’s calling to help women get free and stay free from addiction.

What does the job entail?

I was hired as a Resident Assistant in August 2015 to supervise the women at Gracenter and help make sure the place runs smoothly.

How will your own recovery at Gracenter allow you to help other women who come to Gracenter to heal?

I believe in the power of my testimony. In my new position at Gracenter I can tell women that they can make it through no matter what! It keeps me humble to remember where I came from.  Addicts understand each other.  Most days I share little bits and pieces of my story and encourage them to keep moving forward.

Sharing our stories and points of view are a part of who we are as human beings. Why do you feel that it’s important to tell your story of recovery, and for others to hear it?

Telling my story makes me human and being transparent removes the shame and stigma from addiction.  Also, when people ask I share my faith in Jesus since He saved me through His love, mercy and grace.

What kind of support did you receive during your recovery process?

My family is very supportive and  happy for me. My stronger supporter, after Jesus, is my husband Frank who has been my rock during the entire process. He loved and cared for me through tremendous trials. I’m surprised our marriage survived. He showed me unconditional love and loyalty.

How important was it for you to have Frank and others support you during your recovery at Gracenter?

It was important because it’s hard to be alone.

How important is it for you to continue to have support?

It is vital that I have a support team in place so that I will not relapse.

What has your life looked like since you graduated from Gracenter in 2009?

I have been doing various volunteer jobs at non profit organizations,  mostly in Christian churches. I have volunteered in a hospital and have become a mentor to women. Also, I have been attending Bible College to pursue a BA degree, with the hope of becoming a chaplain.

Between the time I left Gracenter until now, my son Eric was murdered in San Francisco. After his death I relapsed and entered into a women’s discipleship program where my life was restored again. I called Sandra when Eric died and she was a friend to me.  Gracenter was willing to open the doors for me to return in 2013 for help, but God led me in another direction. It was good for me to leave the city for help. It took a lot for me to come back to San Francisco after what had happened with Eric.

The reason I share this part of my story is because it’s important for people to find hope and to know that even in recovery there are failures; but they are not final. God never gives up on us and we shouldn’t give up on ourselves and each other. Sometimes it takes a tragedy to break us so we can be made new. This is what happened to me. I wish I had a very simple story to say I recovered right away, but I had trials and ups and downs.

Gracenter is still helping me more than I am helping them. Being there is a healing and safe place for me. I am so grateful to be able to serve the women there and see Sister Marguerite and Sandra work so hard in a labor of love. They do so much for the women. It’s refreshing to work in a place where people are truly merciful and care deeply to the extent of investing their lives. I am happy to share my heart. It has been quite a journey and I am very grateful to be alive and living to share it. 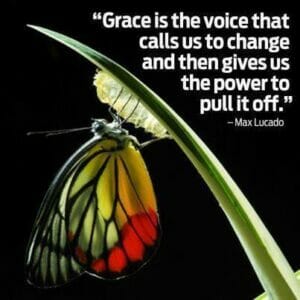