Veterans with The Mission Continues spent half a day at the Good Shepherd Shelter in Los Angeles on September 12 hauling 18,000 pounds of rock in 98-degree heat. It was the hottest day of the year to date in Los Angeles.

Undeterred by heat and sweat, the veterans also painted windows and garden benches, relocated a large children’s sand box, trimmed 12-foot shrubs surrounding the 4-acre complex and laid crushed granite on barren, compacted dirt where nothing has ever been able to grow.

We’ve had a lot of volunteers come to the LA Shelter over the years, but I’ve never seen the likes of the veterans who came with The Mission Continues.

“These men and women know about teamwork. They work in unison, are disciplined, hard-working, committed to the project and are a whole lot of fun to be around. They have given of themselves to the country and now they give to communities across the U.S. They are exceptional people,” said Sr. Anne Kelley, executive director of the shelter.

“We’ve had a lot of volunteers come to the LA Shelter over the years, but I’ve never seen the likes of the veterans who came with The Mission Continues,” she said.

The Mission Continues empowers veterans to find new meaning and focus in their lives through continued service when they are released from the military and return home. They also strengthen their communities in the process.

The Mission Continues finds service projects through research and review. In the months leading up to an orientation for new volunteers, a team from the organization began researching high-impact non-profits in Los Angeles and found Good Shepherd Shelter through online stories of their work.

The team visited the shelter, along with two other finalist organizations, and decided the shelter was the best fit for their services.

“We selected Good Shepherd because of the quality of services it provides to the community, its need for beautification projects, our ability to make a lasting difference at the site, and for the opportunity to expose our veteran volunteers to an organization that provides servant leadership in the community,” said Regan C. Turner, Regional Director, Los Angeles.

“Over the course of four hours of service at Good Shepherd, our veterans had to work hard and trust one another to get the job done. In doing so, they grew as individuals and as a team.

They also gained respect for themselves, The Mission Continues, their community, Good Shepherd, and everyone involved in the project. Through it all, the veterans had fun and walked away with smiles on their faces,” Regan said.

The Mission Continues lives its principles, according to Sr. Anne. She said, “The respect they showed us was incredible. The veterans kept thanking us for our service. Over and over they thanked us. But it is they who deserve thanks. They need to be thanked first, for their service to country and now to community.”

Beyond the respect shown, the veterans mirrored the Sisters’ own vow and core value of zeal. Sr. Anne said, “Their zeal for mission is extraordinary. “I’ve never seen men and women work side-by-side with such exuberance and commitment. They are marvels. All of them!”

I’ve never seen men and women work side-by-side with such exuberance and commitment. They are marvels. All of them!

“And they know how to have fun while doing incredibly hard labor. They performed a magical feat for which I cannot sing praises loud enough,” she said.

Many veterans with The Mission Continues described their service with the shelter as meaningful and profound. One veteran spoke about the positive impact he experienced at the project through serving others while expecting nothing in return.

Another spoke about how she was moved to have found a new purpose in her community because of the impact she experienced at the service project.

Jason Crane, a team leader at the LA Shelter, has served on eight projects with The Mission Continues. He said, “Of all the projects I’ve been on, none compare to our day at the Good Shepherd Shelter.

“This project is my favorite because the Sisters’ mission to help women and children escape from violence in the home is truly profound and life-changing.”

While on the project Jason learned that he had been accepted into Seminary, a dream come true. Jason’s passion is helping others and serving as witness to God’s love and mercy.

According to Regan, the shelter project was one of the largest projects The Mission Continues has done to date. He said, “The mission of Good Shepherd, lasting impact that our volunteers had, and scope of work that we provided were significant for us.”

More than 100 veterans came from across the U.S. to participate in the project. They ranged in age from early 20s to 50s and spanned every branch of the military. Most of them travelled from St. Louis, where The Mission Continues is headquartered. Several local companies sent volunteers to participate with The Mission Continues, including Disney, Bad Robot Productions and Omaze, an organization that supports charitable causes.

Everyone benefited from the afternoon of service. Sr. Anne said, “It was a super day, just incredible. The Shelter has been transformed.” 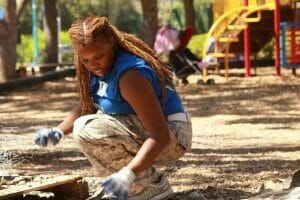 The rest of the story

The story of the Mission Continues began when a returning Iraqi veteran visited wounded Marines at Bethesda Naval Hospital in Maryland. Without exception, each Marine expressed an unwavering desire to continue serving his country, even if he could no longer do so in the military.

Inspired, the veteran used his own combat pay and two friends pitched in their military disability checks to found The Mission Continues. The organization received official non-profit status from the IRS in 2007. 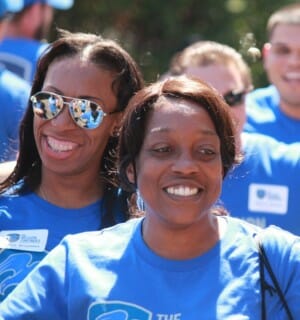 You can learn more about this remarkable veterans organization at www.missioncontinues.org.

You can also keep up with The Mission Continues by checking out the blog at http://www.missioncontinuesblog.org/weekend-remember/